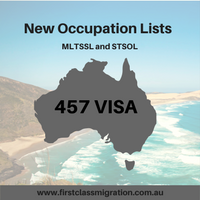 For subclass 457 temporary business visas, there are two occupations lists which are relevant, being the Medium and Long-term Strategic Skills List (MLTSSL) and the Short Term Skilled Occupation List.

Below is a link to the combined list of occupations, indicating whether they are on the MLTSSL or the STSOL.

18 occupations have been removed from the lists completely and these include:

27 occupations have been added to the approved lists including:

22 occupations have been moved from the STSOL to the MLTSSL including senior management positions (CEO), University Lecturers and Environmental Scientists.

We will of course advise during the 457 process if the occupation is caveated and what caveat applies.

The English Language Salary Exemption Threshold which exempted applicants whose salary was over $96,400 from meeting the English language requirements, has been removed for applications lodged on or after 1 July 2017.

English language test results must therefore be provided with all applications lodged after 1 July 2017 unless the applicant holds a passport which exempts this, being UK, USA, Ireland, Canada and NZ.

English language is evidenced if the applicant has equivalent to one of the following scores below:

Passport holders from Bangladesh, Nepal and Pakistan applying for a subclass 457 visa in the occupation of Chef or Cook have been added to the list of applicants who will require a mandatory skill assessment from TRA.

The provision of police clearances has become mandatory for all 457 visa applications lodged after 1 July 2017. Applicants will be required to provide a police clearance from all countries they have resided in for 12 months or more in the last 10 years.

Please contact our office should you have any queries about the above.