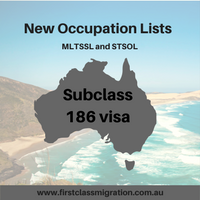 There are two occupation lists for Subclass 186 (ENS) applications:

Please find a link below to these two lists (combined):

The caveats were introduced for certain occupations back in April 2017 but these were only applicable to 457 visa applications previously. However, for Subclass 186 Direct Entry, if the nominated occupation has a caveat requirement, then this must be met also – this is applicable for applications lodged on or after 1 July 2017

The age requirement at time of application for 186 Direct Entry applicants is now under 45 years of age (was previously 50). This is applicable for all applications lodged on or after 1 July 2017.

There are some exemptions.

Exemptions are now available to applicants who are either:

The age requirement for ENS Temporary Residence Transition Stream still remains at under 50 at time of application until March 2018 when it will also drop down to under 45 years of age in line with Direct Entry.

The English language requirement for applicants lodging a subclass 186 application, Temporary Residence Transition Stream after 1 July 2017 have increased to 6 in each component of IELTS or an equivalent test (competent English).

The English language skills exemption has been removed for ENS for those who have nominated earnings at least equivalent to the current ATO top income threshold ($180,001). This applies to all applications including those lodged prior to 1 July 2017.

The exemption from a skill assessment for applications made under the Direct Entry stream for ENS has been removed for those who have nominated earnings at least equivalent to the ATO top individual income tax rate (AUF$180,001). This applies to all applications, including those already lodged that have not been determined. We will contact our clients individually who have been affected by this change and have applications still being processed.

Genuine need – this will be an interesting one!

From 1 July 2017, all ENS TRTS and DE stream nominations must provide evidence of “genuine need” for the person to work in the nominated occupation. This is understandable for those applicants applying via DE stream who have never worked for the sponsoring employer, but it will be interesting to see how they assess “genuine need” in the TRTS stream when those applicants have already been working in the sponsored role as the holder of a 457 visa for two years (3 years after March 2018)

Please contact our office should you have any queries about the above.